The review of competitions in 2015 brought in some changes to the Men's Order of Merit. Following feedback from the players the Selection Committee incorporated some further modifications for 2017 including separating out the points awarded for good performance at national level. For 2022 changes have been made to the points awarded per event. These are limited to the first 10 places in all strokeplay events.

The overall Order of Merit will involve our programme of 13 events throughout the summer (including the Lothians Amateur Championship at Roayl Burgess).  A separate table for points awarded at national level will be displayed based on the points awarded by the SGL. (eg: Scottish Golf Limited, England Golf etc.) See the Lothians OOM events on the fixture list on the Home tab of the website.

The first event in the Lothians 2022 schedule is the Open Scratch competition at Musselburgh Golf Club on 1 May 2022, the table below provides all dates and venues for 2022

The events on the schedule above will count towards the 2022 Lothians Golf Association Men's Order of Merit. Events fall into three categories as follows.

To be eligible for inclusion, a player must:

a) Be male and of amateur status as defined by R&A Rules.

b) Players must belong yo a course-owning or affiliate member of the Association.

a) Eligible players will receive points relative to their final position/category in a nominated event.

b) All points collected by a player will form an aggregate and this total will determine their final placings.

c) In the event of a tie for first place, the title will be shared.

e) For events where there is a cut, players must make the cut to complete the tournament and receive points.

f) In the event os a 36 hole event being reduced to 18 holes, Category 2 points are awarded.

The Lothians National Order of Merit will be extracted directly from the Scottish Order of Merit. You will find this by following this link.   https://scottishgolf.org/performance-homepage/

Prize vouchers will be presented for at least the first two places in the 2022 main Order of Merit (depending on the level of sponsorship), with the leading 2 players on the main OOM and the first 2 players on the national OOM automatically qualifying for selection for the Men’s ATC team. The national players must however also be in the Top 20 of the main OOM to qualify for automatic selection. If this is not the case then any 'freed up' space is added to the two 'selectors' choices.

After what can only be described as an exceptional season, it was no surprise that Allyn Dick (Kingsfield) won the Lothians Order of Merit. His wins in both the Lothians Championship and the South East District stood him in good stead to capture the OOM prize. He also was the leading player after qualifying in the Lothians Amateur Championship and also won the Silverknowes Open. His tally of 622 points must be one of the highest ever totals in the history of the competition and a 183 points of his nearest rival and friend Kenny Glen (Craigielaw)

Winning this years event has provided Allyn with the glorious hat trick of victories in the OOM and this has allowed him to feature in the Lothians Team which had winning success at the Men's Scottish Area Team Championships.

Allyn (left) is pictured here being presented with the OOM Trophy from David Millar who was representing our Sponsor for this event Bluefin Sport. 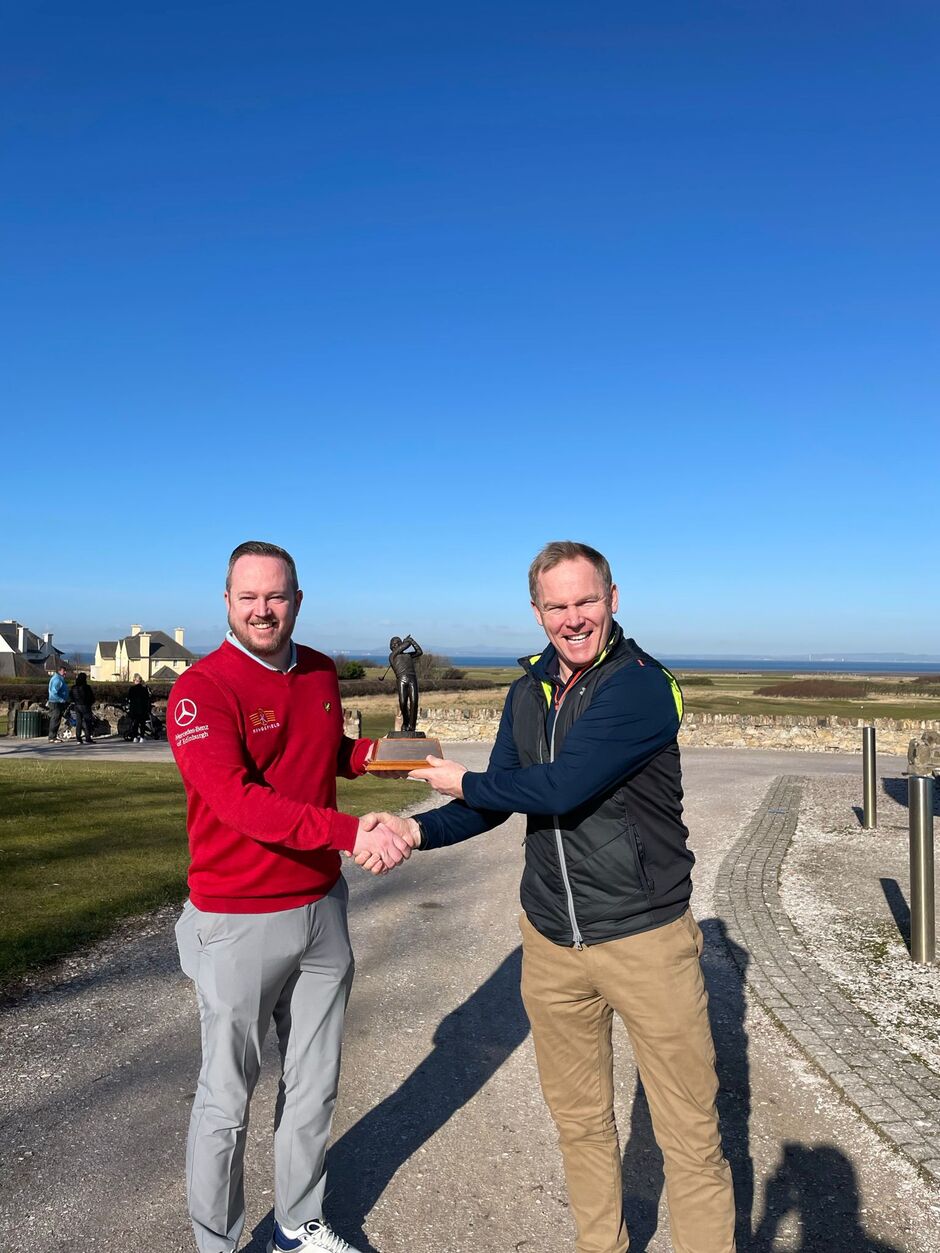 Using the OOM as part of the qualifying process for the Area Team Championship team has raised interest with good turnouts for most of this year’s events.