Host of the Lothians Sivewright Quaich 2021

Final will be played on Sunday, 18th September 2021

The Sivewright Quaich was instigated by W A W Sivewright, one of a distinguished band of people who have been President of the Lothians Golf Association (1960-62) and of the Scottish Golf Union (1966-68). He also served as Secretary of the Lothians (1951-1958). The idea for the event was in response to an increase in the subscriptions, by the SGU, for what were called non-course owning clubs at the time. (Now known as Societies)

The format is a handicap version of the Dispatch Trophy where four-man teams play foursomes aggregate match play in a knock-out competition during the season.

The final has been traditionally played at Prestonfield Golf Club, which was Bill Sivewright's home club.

The initial tournament was a great success with 32 teams taking part and Ethicon beating Standard Golf Club 4 and 3 in the final.

Encouraged by the extra teams over the last few years we are hoping the numbers will be sustained if not increased in 2021. Societies now also have the option of entering more than one team which is also helping to keep the numbers up.

One issue has been the cost of green fees but with teams only having to pay once in the season (when they lose, or not at all if they reach the final) this can be contained especially if the host society adheres to the suggestions made in Rule 9 which is to speak to the host club secretary beforehand and try and get a reasonable deal especially as this is a foursomes event.

Our recent governance review highlighted the fact that we should do more for players in the higher handicap ranges. This competition caters for people with handicaps between 6 and 18 so it certainly addresses that issue.

The final was played at  Prestonfield Golf Club on Sunday 12th September 2021 and the Final match produced some excellent golf between two closely matched teams in Buckstone 'A' and Aegon.

With the early exchanges going in favour of both teams it was not until late in both matches that Buckstone 'A' took a grip of the match. The first match reached the 17th with Buckstone showing a 4 up scoreline, the second pairing for Buckstone having just won the 15th to go 1 up it was concluded that the match was won by Buckstone 'A' by 5&4

The Buckstone team were represented by Robert Gray, John Dunn, Martin Hunter and Douglas Sutherland and pictured here with the trophy. 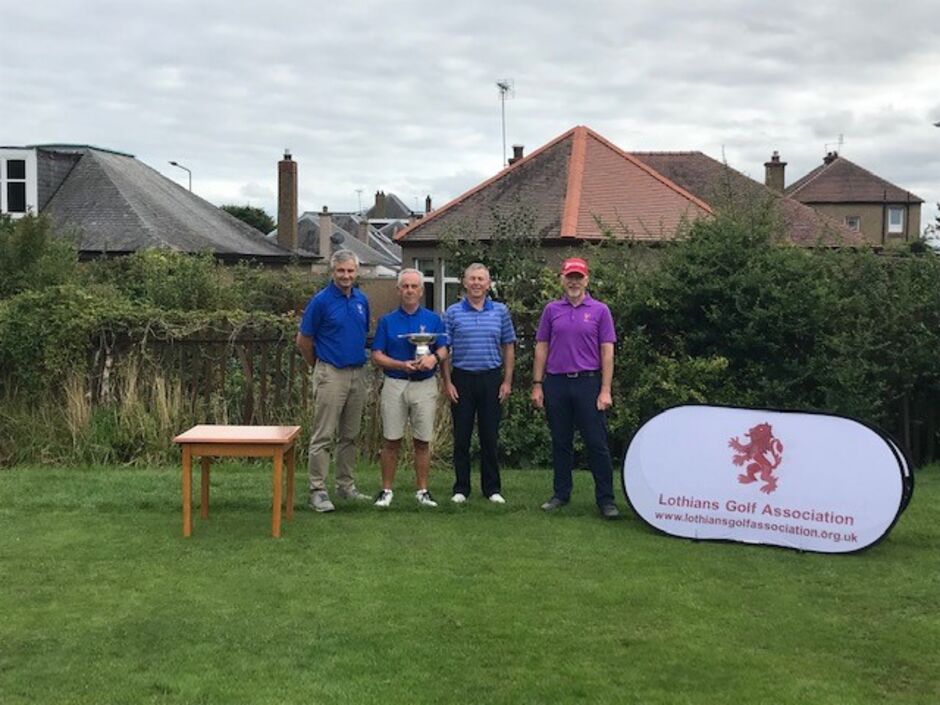