Matchplay to be played on Monday 2nd, Tuesday 3rd and Wednesday 4th August 2021

The GolfFit Lothians Junior Championship normally takes place in June each year at the Braid Hills No 1 course however to avoid clashing with exams and to fit in with the busy summer junior golfing calendar we tried August in 2019 and are doing this again in 2021.

This is an event for boys who are under the age of 18 on 31st December in the year prior to the year of competition, it is open to players whose home club is affiliated to the Lothians Golf Association. Its roll of honour makes for impressive reading, the winners including Andrew Oldcorn (1977), Ian Young (1978) and David Inglis (1998).

The tournament will consist of an 18 hole stroke-play qualifying event on Sunday 1st August with the players with top 8 scratch scores going on to play match play, in the evenings, on the following week. The champion receives the Spiers Trophy. The leading qualifier will receive the Lindsay Trophy. The Speirs Trophy is the second oldest of the trophies held by the Lothians Golf Association, having been first contested in 1925.

Thanks to support from the Stephen Gallacher Foundation there are also trophies for the leading Under 16 and Under 14 players in the qualifying event. This is a good opportunity for the younger players to get familiar with the Braids course, win an age range trophy and set themselves up for the main championship in future years.

More detailed information about the trophies and the winners, including the runners-up and the scores, was included in a hand-out enclosed with a centenary brochure handed out at the 2021 event. This can be seen if you click here.

The tournament returned to it's normal venue of the Braid Hills for this year's event. It was Gullane GC that provided two young players in the Final match of this years championship. On a slightly breezy sunny night the players set off with one thing on their mind. It was an even first six holes with both players winning a hole each to have the match at all square. However, it was Fergus Brown who made a big move over the next four holes winning three of them to be three up after 11. Kiron Gribble never gave up and both boys birdied the 12th. Gribble unfortunately bogied the 13th with Brown winning the hole with a Par, and moving to 4up. The spoils were shared at 14 and with Brown's commanding lead and only looking for a half at the 15th he chipped to two feet with his third shot.. Gribble's birdie attempt went just passed and was conceded. This left Brown to finish with a par as he tapped away his putt for a win 4&3.

Both Boys can be proud of their efforts this week, particularly Kiron who is current leading the Boys Order of Merit and also being the leading qualifier from Sunday's round. This is Brown's first time in the Championship and has started with a winning effort.

Well done to all the players throughout the week who played with enthusiasm, speed and determination. 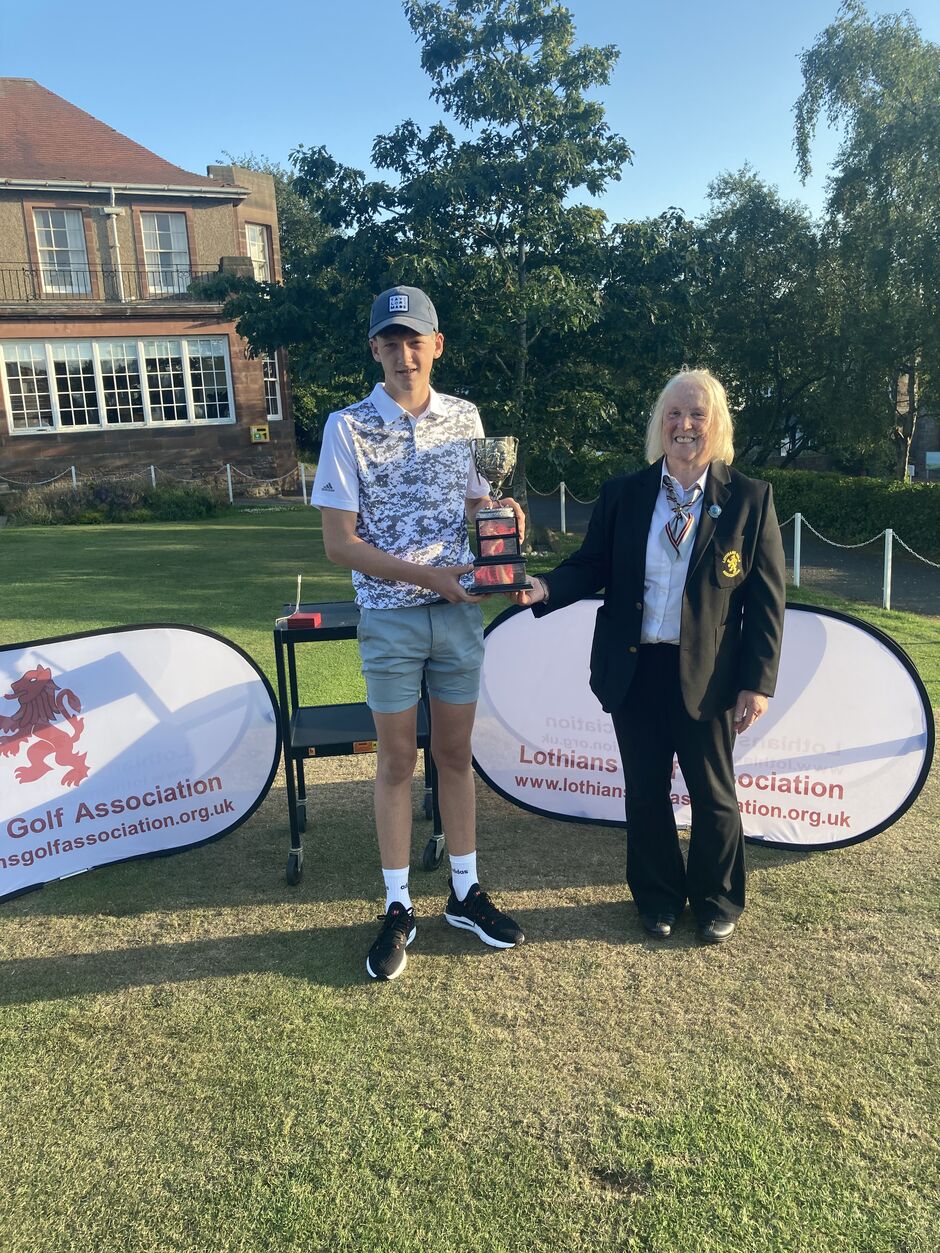 Despite the torrential rain of the previous day the Kingsknowe course was presented in excellent condition, the Association would like to thank the greenkeeping staff for the extra efforts they went too to ensure play for the Championship.

The early morning cloud soon disappeared and the competition was generally played in sunshine conditions which led to competitive scoring from our young players.

Congratulations go to Archie Finnie (Royal Burgess GS) for his winning score of 70 (36-34) to take the Speirs Trophy as the Leading Scratch player. Archie is pictured here with his trophies, the Association also took the decision to present the Lindsay Trophy which is presented to the leading qualifier, however, due to COVID-19 restrictions we were unable to provide a match play competition and therefore both trophies were presented by President, John Allan to the winning player.

Jake Johnston  (Royal Burgess GS) won the SGF Under 16 Trophy with a 70 and Runner Up was Ryan Gallacher with a BIH 71 to third placed Josh Beveridge. In the SGF Under 14 category, it was success for James Wood (Bathgate) who had a BIH 79 to joint Runners Up Kiron Gribble, Gullane and Blair Roberts, Dundas Parks who recorded the same score. 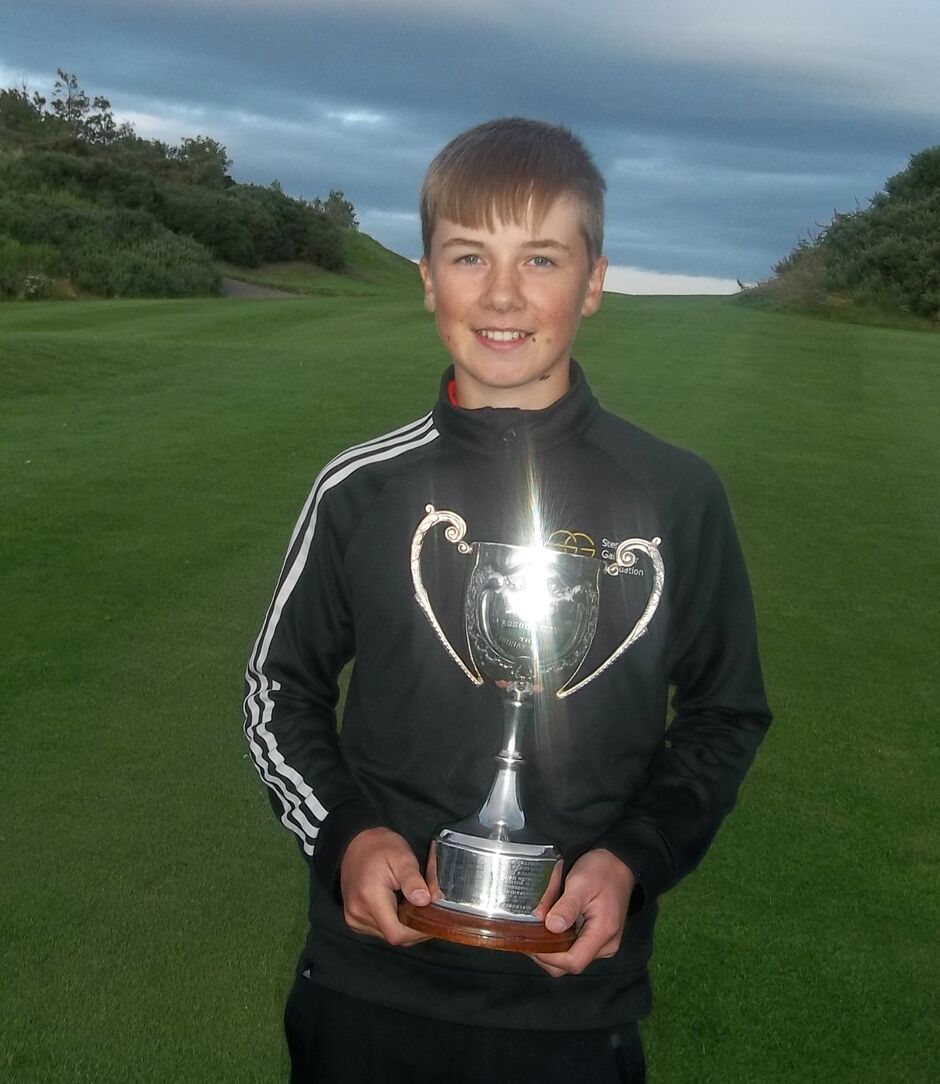 Despite terrible weather we managed to get 40 players out on the Braids No. 1 course.  The Leading player and winner of the Lindsay Trophy was Callum Kenneally (Kilspindie) who returned not only the best Gross score of 69 but also the best Nett score of 63. Jack McDonald (Dunbar), Arron Hall (Kilspindie), Lyle Murdoch (Kings Acre) and Euan Canavan (Longniddry) were all two shots behind.

This, as always, was played over the Braids No.1 course with support from Edinburgh Leisure and sponsored by Golf Fit.

Because of the small field it was decided to only include 4 players in the match play stage of the championship with the cut coming at 72 or better on a count back. Jack McDonald (Dunbar) and Arron Hall (Kilspindie) were not available because of a conflicting national event. 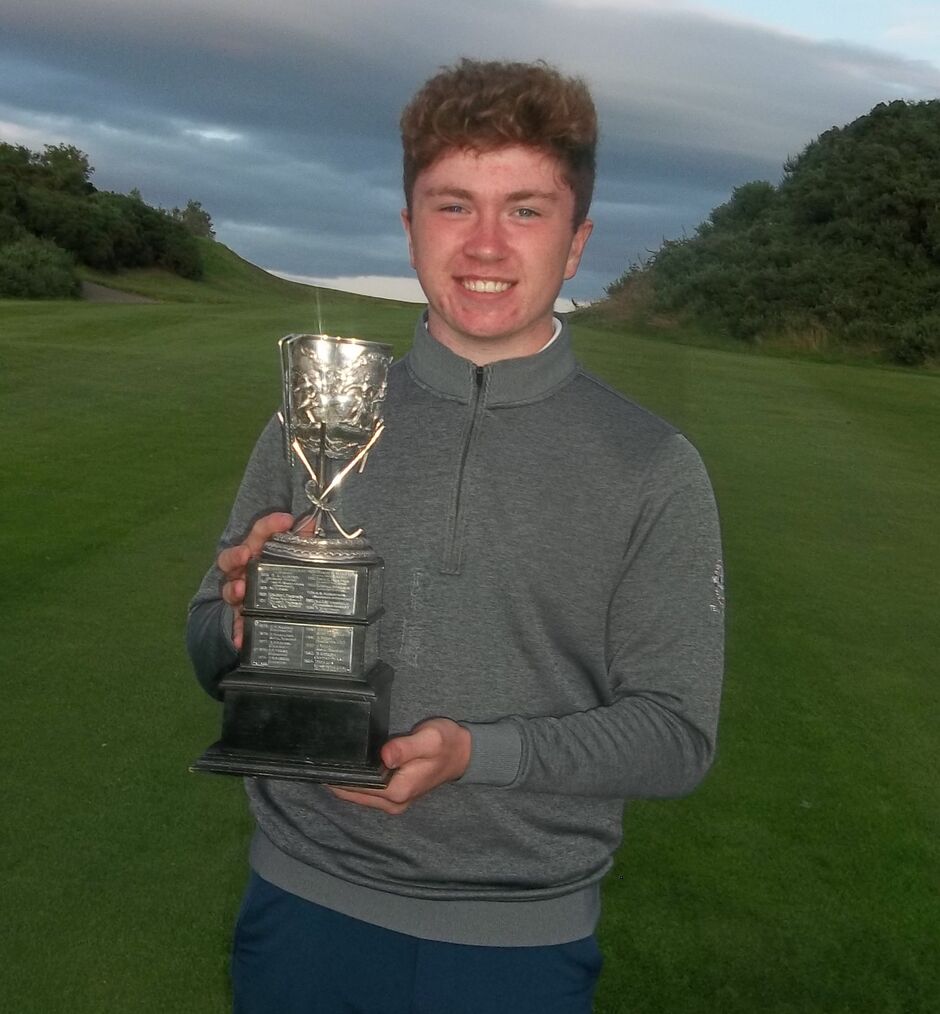 Defending champion Ciaran Paterson (Ratho Park) retained the Boys Championship Spears Trophy after a good win by 4&3 over Euan Canavan (Longniddry). The Ratho Park player was always in control of the match and was able to maintain his focus throughout, despite the blustery conditions, to take the title.

Callum Kenneally (Kilspindie) and Lyle Murdoch (Kings Acre) went out in the semi-finals, at the 17th & 18th holes respectively, after close matches. 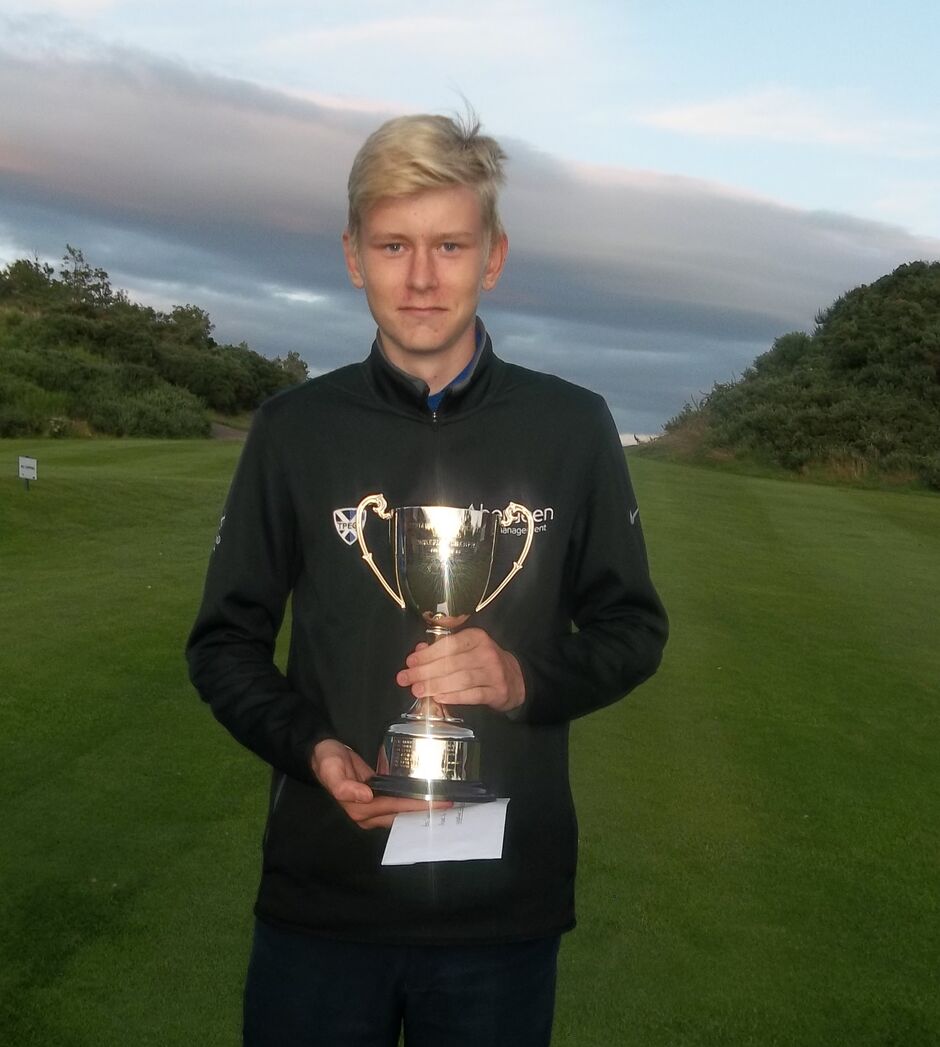 In the Under 16 Championship in form  Valdemar Hundeboll (North Berwick) ran out the winner by 2 holes over his opponent Archie Finnie (Royal Burgess) and won the Stephen Gallacher Foundation U16 Trophy. This win was hard on the heels of his success in the Boys OOM.

Robbie Main (Royal Burgess) and Ryan Gallagher (Longniddry) went out in the semi-finals. 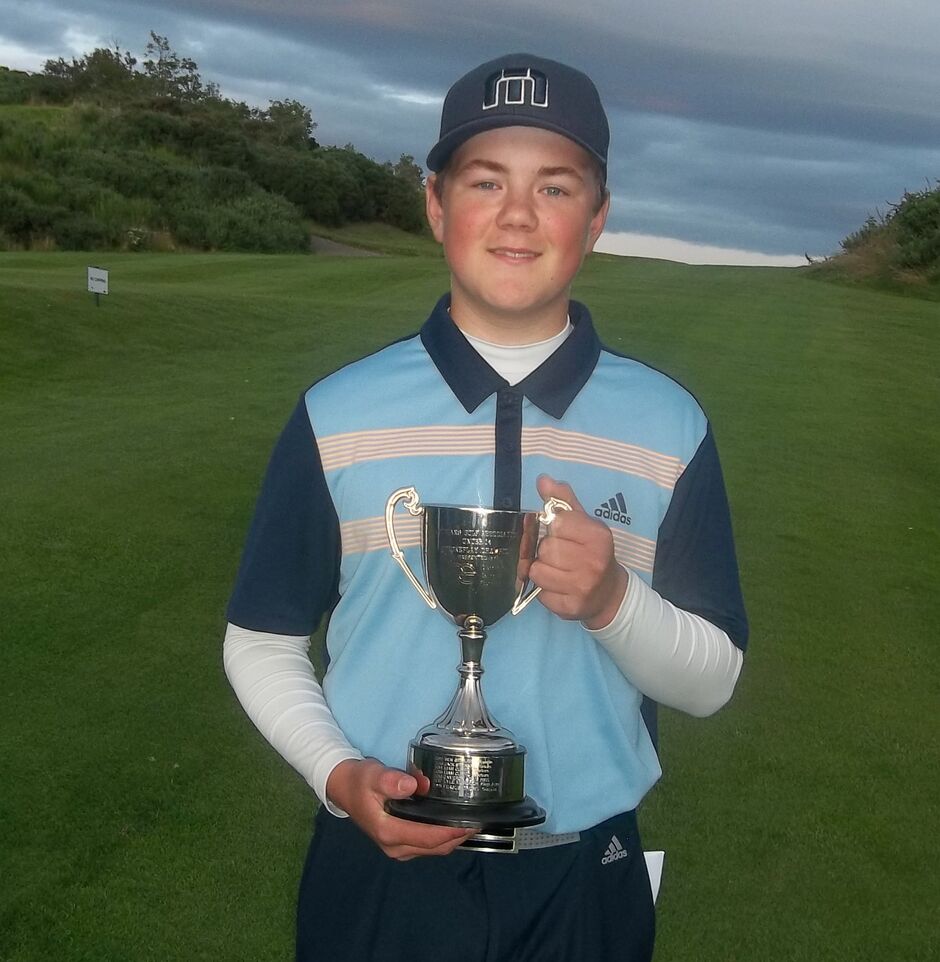 In the Under 14 Championship Andrew Hendry (Gullane) took the Under 14 title winning 3&2 over Harry Bent (Longniddry) and won the Stephen Gallacher Foundation U14 Trophy.  The Gullane lad stuck to his task throughout the match and managed to get his head over the line.

Sean Gallacher (Prestonfield) and James Wood (Bathgate) went out in the semi-finals.